The wireless Sensor Globe is a powerful multi-functional sensor concept the size of a small grapefruit. Customers can build their own units with various high end micro-sensors and monitor real time data through an app on their smartphone, tablet or via the internet. Or simply leave the Sensor Globe anywhere to log data for months at a time, then retrieve it and upload data for analysis through the Sedna Cloud.

«We are now launching the first version which is available with micro-sensors such as optical oxygen, temperature, pH, acceleration and shock. Later this year Nitrate, Ammonia and Salinity micro-sensors will follow, and we will keep adding many new sensors and features going forward to stay leading edge» say Canadian Co-Founders Sheamus MacDonald and Aleksandr Stabenow.

The Sensor Globe was originally designed to monitor water quality and animal welfare for the live lobster fishing industry in Canada. Unlike any other sensor concepts on the market, the Sensor Globe has adjustable internal ballast so that it can either float like a small iceberg, sink or have neutral buoyancy. It measures only 95mm diameter, weighs 325 grams and is designed to “flow-with-the-fish” through pipes, hoses, fish pumps, lice treatment and other machinery. Measuring both water quality parameters, but also any physical impact on the fish (acceleration and shock), which both are crucial for fish welfare. Or simply float around in a fish tank!

Mr. Severinsen who has developed many new markets during his 25 years with AKVA group is now Sedna’s Norwegian Partner and together they have just set up Sedna Technologies Norway AS in Stavanger. This will be the hub for commercializing the product throughout Europe, Asia and Africa.

“I am very excited to work with such young and talented entrepreneurs in Canada, to offer my lifelong experience in the aquaculture technology industry and together grow the company, work on R&D, and set up a global sales and service network” says Mr. Severinsen. And he adds; “We discover new uses and markets for the Sensor Globe concept just about every week right now. Including the growing need for environmental impact monitoring by various companies involved in mining, forestry, energy, construction, engineering and consulting, as well as in many government agencies. The product is in reality a “disruptive technology” and with a price point that opens up a huge global market”.

Attached photos: Free use as long as they are credited Sedna Technologies. More photos available on request.

Nearly 20 percent of all food produced in Canada is lost to avoidable waste along the food supply chain. Tech companies, such as Sedna Technologies and Bluicity, are working to fix that.

Few products are as fickle as a live lobster. From the time they’re hauled from the ocean to the moment they land on someone’s stovetop, they’re susceptible to minute changes in their environment. Stored in water that’s too cold? Dead lobster. Too warm? Dead lobster. Too acidic? Not enough oxygen? Wonky pH? You guessed it.

No one knows that better than Sheamus MacDonald. Growing up in a commercial-fishing family in Cape Breton, Nova Scotia, the 31-year old MacDonald has worked seasonally as a lobster fisher since he was a teenager — enough time to have experienced first-hand the sea change that’s transformed Canada’s lobster supply chains in the past decade.

Not long ago, most lobster caught in Nova Scotia was bound for the United States. But as demand has surged from overseas markets, the industry has been forced to pivot. In 2019, China overtook the U.S. as the biggest destination for Nova Scotia’s lobster industry — and most of that demand was for live animals, rather than processed lobster. “A live product is much more sensitive and vulnerable,” says MacDonald, “and the whole supply chain then becomes much more delicate.” 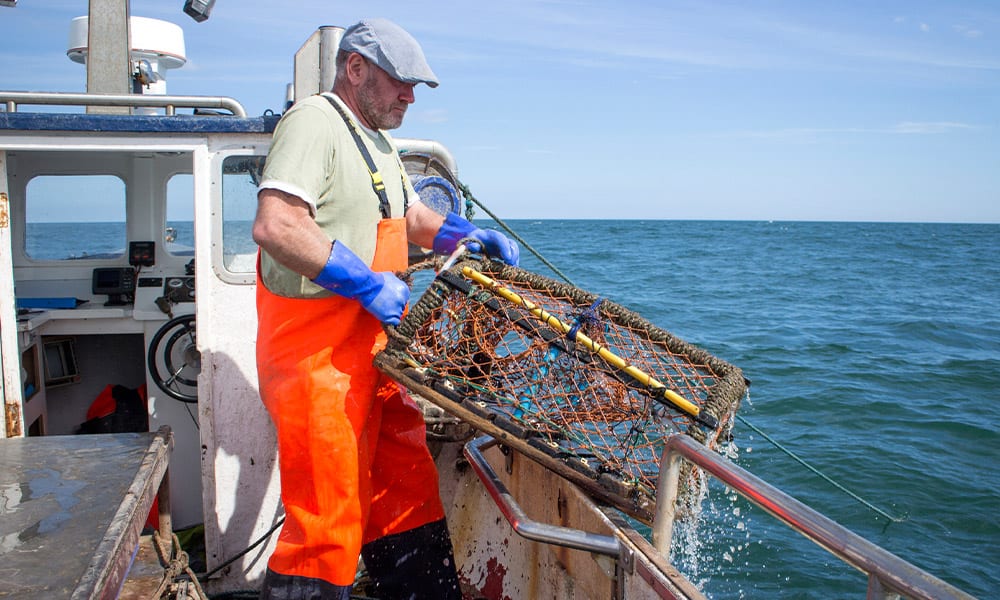 These challenges, of course, are not exclusive to seafood. According to a recent report by Second Harvest, a Toronto-based “food rescue” charity, nearly 20 percent of all food produced in Canada — worth almost $50 billion annually — is lost to avoidable waste along the food supply chain, from warehousing to distribution to delivery. That’s thanks to everything from bad packaging to lax environmental controls to imprecise demand forecasting. Fortunately, these are also problems that emerging technologies — in particular, predictive analytics, IoT sensors and AI — seem almost tailor-made to address, even if their potential is only just beginning to be tapped.

In 2018, MacDonald founded Sedna Technologies, alongside his former university roommate, Aleksandr Stabenow. Their idea was to apply new tech solutions to address the lobster industry’s age-old problems. The company deploys a mix of IoT sensors and data analytics, up and down the seafood supply chain, monitoring live and farmed products in real time. That allows buyers and harvesters to improve efficiency, move product to market faster and quickly identify problems that cause waste and spoilage.

“Logistics for the food industry is fundamentally not very different than it was 2,000 years ago,” says Bob Burrows, CEO of Bluicity, a Toronto-based supply-chain logistics startup. “It’s all push. You grow everything you can, put it in a truck to go to go downstream and throw out what’s spoiled. That’s why so much of the food grown in the west ends up being thrown away — it’s just the cost of doing business.”

That cost comes due not just in the price of food, but in labour costs and environmental impacts. Burrows founded Bluicity last year, aiming to work with food and pharmaceutical-industry partners to shrink those costs, developing small IOT devices that can accompany food and other sensitive cargos —“anything from a bin of lettuce to 60,000 doses of COVID vaccine,” says Burrows — from one end of the supply chain to the other. “Our perspective is how do we change the way we look at the whole chain of custody,” he says, “from producer to truck to cold room to distribution to retailer.”

Food producers, processors and retailers have used IoT devices for several years now, monitoring everything from temperature to moisture to the respiration rate of produce during transit and storage. In the United States, the Food and Drug Administration’s deputy commissioner, Frank Yiannis, has become an evangelist for the power of emerging technology to usher in a less wasteful and better-traced supply chain. The agency has put together a blueprint for a “new era” of food safety, with tech-enabled traceability at its core.

But the potential is only in its most nascent stages, says Burrows. The big challenge is the paucity of data: “We need massively distributed Internet of Things,” he says.

Today, a distributor may monitor a truck with IoT sensors, and a storage facility may do the same. But coverage isn’t universal throughout the supply chain, sensors aren’t deployed as broadly as they could be, and interoperability between different stakeholders’ data-gathering devices (i.e., farmers, transport operators, storage facilities, retailers, etc.) is fragmented. Burrows instead wants to see IoT that’s universal, comprehensive and live all the time.

With clients that span the entire supply chain, from harvester to purchaser, Sedna’s offers an example as to how this comprehensive approach could work more broadly.

That begins with harvesters. As the market for Nova Scotia lobster has boomed, more harvesters have outfitted themselves with larger boats, going farther out to sea, for days at a time. That means their catch might remain in the boat’s “live well” for longer, which could start lobsters off on the wrong foot before they even get to the dock. For example, if dissolved oxygen levels drop too low, that could affect mortality further down the supply chain.

The same close care needs to hold at each subsequent step, from storage to packaging to shipping. Traditionally, an aquaculture operation might use chemical-test strips to monitor water quality. Sedna’s sensors can monitor them in real-time, pushing notifications to an employees’ phone the moment a problem arises.

That’s a big deal, particularly in the lobster industry, since products now have to make it farther than ever. Whereas most Nova Scotia lobster might once have been shipped to Boston or New York, huge volumes are now being shipped not just overseas, but to ever-more distant markets.

“When we first started in China, they might only get sent to Beijing,” says MacDonald. “But now there are cities 10 more hours away, so now you need to get to Beijing, but then add another leg to the journey, and the product needs to have the stamina to get there.”

Sedna has already expanded beyond Canada, working in the northeastern United States, and has recently opened an office in Norway. The company now plans to take the enormous amount of data it’s generating via sensors and layer in artificial intelligence. That could mean, for example, identifying exactly where mortality strikes along the supply chain, and correlating different factors causing animal stress to identify patterns, and find solutions. 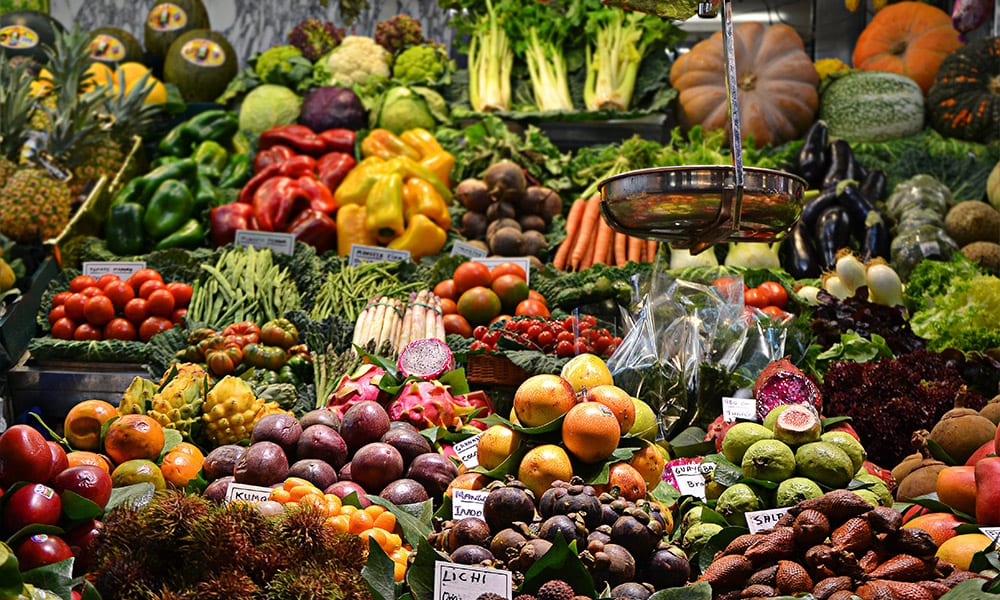 Julian Billot, Scale AI’s CEO, says that more projects dealing with sensitive and perishable cargo may be right around the corner for the supercluster. Several projects underway already hint at the possibilities to come.

One, at the Port of Montreal, is currently using a machine-learning model to analyze variables including ship arrivals, rail-car deliveries, storage capacity and workforce availability to ensure that critical cargo, including medical supplies and pharmaceuticals used to fight COVID-19, make it out of port as fast as possible.

And a demand-forecasting project with Loblaw is currently analyzing consumer preferences to ensure stores are stocked with alternative products if customers’ preferred choices sell out. A future application could easily work in reverse, says Billot. With more data about purchasing patterns based on geography, seasonality and other factors, a grocery store could forecast demand with more accuracy, reducing over-stock and reducing waste.

But the data has to come first. “We’ve been approached by AI startups on food,” says Bluicity’s Burrows, “but they have no data to work with.”

At the moment, he says, a company like his can prevent waste by pointing at individual problems —identifying a pallet of food sitting in the sun and bringing it inside, for example. Once supply-chain data is rich enough — an abundance of sensors communicating from farm to fork — entire supply chains will be analyzed to identify where loss is most pronounced.

More important still, demand forecasting will be able to precisely predict the tiniest fluctuations in consumer preferences. “That’s where we can really make good on the promise of this technology,” says Burrows, “and see the food world move from push to pull.”

Sedna Technologies: From Catch to Export

This website uses cookies to improve your experience while you navigate through the website. Out of these cookies, the cookies that are categorized as necessary are stored on your browser as they are essential for the working of basic functionalities of the website. We also use third-party cookies that help us analyze and understand how you use this website. These cookies will be stored in your browser only with your consent. You also have the option to opt-out of these cookies. But opting out of some of these cookies may have an effect on your browsing experience.
Necessary Always Enabled
Necessary cookies are absolutely essential for the website to function properly. This category only includes cookies that ensures basic functionalities and security features of the website. These cookies do not store any personal information.
Non-necessary
Any cookies that may not be particularly necessary for the website to function and is used specifically to collect user personal data via analytics, ads, other embedded contents are termed as non-necessary cookies. It is mandatory to procure user consent prior to running these cookies on your website.
SAVE & ACCEPT